THE PLACE AT THE END OF THE WORLD: Foreign Correspondent Janine Di Giovanni. Paris Soirees Dinner Sun 21 May At 18h30 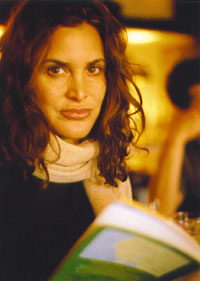 Our Guest Of Honor:

Janine di Giovanni is one of Europe's most respected and experienced reporters, with vast experience covering war and conflict. Her reporting has been called "established, accomplished brilliance" and she has been cited as "the finest foreign correspondent of our generation".

Born in the US, she began reporting by covering the first Palestinian intifada in the late 1980s and went on to report nearly every violent conflict since then. Her trademark has always been to write about the human cost of war, to attempt to give war a human face, and to work in conflict zones that the world's press has forgotten. She is a writer for The Times of London and Vanity Fair, and has also written for The New York Times Magazine, the New Republic, the Spectator, National Geographic and many others

Di Giovanni's latest book, The Place at the End of the World, a collection of her essays, was published by Bloomsbury in January, 2006. Lat autumn, she focused on a major project on Muslims in Europe, as well as working on projects about Gaza and Tsunami orphans. She frequently lectures on human rights abuse around the world.

Janine di Gionanni is a writer for The Times of London and Vanity Fair, a contributor to The New York Times Magazine, The New Republic, The Spectator, National Geographic and many others. She also writes columns and Op-Ed pieces for the Wall Street Journal, the International Herald Tribune and is a columnist for MilitaryWeek.com.
Posted by Patricia Laplante-Collins at 1:54 PM