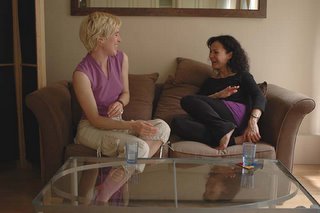 Our Guests Of Honor:

Cecilia Woloch is the author of Sacrifice (Cahuenga Press 1997), which was a BookSense 76 selection; Tsigan: The Gypsy Poem (Cahuenga Press 2002); and Late (BOA Editions 2003), for which she was named Georgia Author of the Year in Poetry. She conducts workshops for writers across the U.S. and around the world. She founded and directs the annual Paris Poetry Workshop. Cecilia's work was included last year in BEST AMERICAN POETRY 2005, and in Garrison Keillor's anthology, GOOD POEMS FOR HARD TIMES. She's recently been appointed to a faculty position in the creative writing program at the Unversity of Southern California.

Lisa Pasolds first book of poetry, Weave, was published in 2005 by Frontenac House, Calgary; Canada .Her work has also appeared in anthologies such as 100 Poets Against the War. She grew up in Montreal, later moved to New York, and currently lives behind Montmartre, near the flea market. Frontenac House published her second collection of poems, A Bad Year for Journalists, in 2006.

The Paris Poetry Workshop, founded by poet Cecelia Woloch, honors an expanding international community of poets writing in English, who come together from all parts of the world to generate new work, hone their craft, share and support one anothers creative endeavors.
Posted by Patricia Laplante-Collins at 2:23 AM