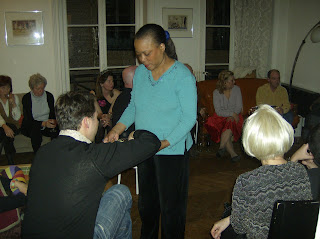 Visit Patricia's website: http://www.parissoirees.com
What could be nicer than meeting new people in the comfort of a friend’s apartment? It’s relaxed and familiar. And a lot of fun. We’re in a lively part of town. Many trendy places to go afterwards.15 Euros. Wine, Canapes, Appetizers.

http://www.cafedelasoul.com/wordpress2/2007/02/10/patricia-la-plante-collins-the-grand-dame-of-parisian-soirees/
Patricia writes on being an Expat:"... As the years went by, I also realized that the feeling of being foreign and other, transcends even race. You are not part of their (French) culture. It doesn't matter who you are or of what origin you are. You're either French (in your head and behavior), or not. When I began to see that, I began to identify myself as an expat. The sum of being an American who lives in Paris, an African-American trying to find roots here, minus not being French - but seeing life internationally - on a large scale and permanently, equals my personal experience of being an expat."
Patricia Laplante-Collins
13, rue de Mulhouse
75002 Paris, France
Tel: 33 1 43 26 12 88

Email: parissoirees@gmail.com
Website: http://www.parissoirees.com
Blog: http://parissoireesparisatnight.blogspot.com
(Photos and descriptions of some Soirees. A good way to see what goes on.)
Posted by Patricia Laplante-Collins at 7:06 PM