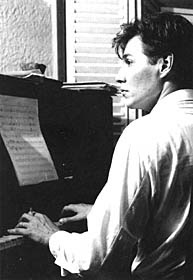 THANK YOU FOR FORWARDING THIS EMAIL TO FRIENDS !

Photo Tom in his apartment in Ipanema, Rio de Janeiro

For Expats Of All Origins. French. Visitors.

Our Guest Of Honor

Guitarist and vocalist YVES LE Goff will interpret the songs of Antonio Carlos Jobim, a founder of BOSSA NOVA who launched such international stars as Astrud Gilberto.

Yves, who plays guitar and sings, dedicates his musical life to Jobim. It’s a passion that just happened. He can’t explain it. He says that some musicians dedicate themselves to Bach or Mozart and he dedicates himself to Jobim.

When I first spoke with Yves about Jobim, I confessed that I didn’t know anything about him. Then I googled and I found the story of an amazingly talented songwriter and vocalist who wrote songs for “Orfeo Negro” (“Black Orpheus”- including “Someone To Light Up My Life”), collaborated with Stan Getz and Joao Gilberto on one of the best selling jazz albums of all time, “Getz/Gilberto” and who wrote songs that launched the Bossa Nova movement/style: “The Girl From Ipanema” and “Corcovado”. These songs made Astrud Gilberto an international sensation and “The Girl from Ipanema” was record of the year in 1964. They endured. (Grammy awards). We all still sing them.

I looked at photos which show a strikingly handsome young man and a gorgeously cute older whom you can't help but adore.

Jobim's musical roots were planted firmly in the work of Pixinguinha, the legendary musician and composer who began modern Brazilian music in the 1930s. Among his teachers were Lúcia Branco, and, from 1941 on, Hans-Joachim Koellreutter. Jobim was also influenced by the French composers Claude Debussy and Ravel, and by jazz. Among many themes, his lyrics talked about love, self discovery, betrayal, joy and especially about the birds and natural wonders of Brazil, like the "Mata Atlântica" forest, characters of Brazilian folklore like Matita Pereira (Saci Pererê), and his home city of Rio de Janeiro (His childhood neighborhood was Ipanema). His family, of French origin, immigrated to Brazil in the18th century.

There are many sites. I liked www.jobim.com.br

PARTICIPATION FOR SUNDAY: EUR 20 and ANY social or business card or brochure , if you have one. Thanks for exact change.

Our friends' large and FUN private residence in the heart of the LATIN QUARTER. Metro: St Michel. Details with reservations.

PATRICIA NEEDS TO CONFIRM YOUR RESERVATIONS: Please CALL Patricia on

33 (0) 6 43 79 35 18.
E-mail: parissoirees@gmail.com THANK YOU FOR ALWAYS LEAVING YOUR TELEPHONE NUMBER WITH EACH RESERVATION (EVEN IF YOU THINK THAT PATRICIA ALREADY HAS IT).

WE CAN'T READ EMAILS ON SUNDAY. ON SUNDAY, PLEASE CALL TO RESERVE OR TO CONFIRM YOUR RESERVATION. NO TEXT MESSAGES PLEASE.

Posted by Patricia Laplante-Collins at 3:14 AM